Despite their size the largest ever dinosaurs may not be considered the most fearsome of prehistoric beasts. Still, research and evidence suggest that these incredible dinosaurs could trump even the most giant carnivores in size. With so many herbivores falling into the category of sauropods, there’s no wonder these dinosaurs towered over most other types.

The largest Ever dinosaur proven is the Argentinosaurus, at 100-130 ft and 120,000- 220,000 lbs. There is intense debate over the title of largest ever dinosaur. Similar size dinosaurs include Puertasaurus and Patagotitan. However, unproven reports of 200ft dinosaurs like Amphicoelias still capture the imagination.

If you’re a fan of Jurassic Park, you have a good idea of what a Brachiosaurus is and what it may have looked like when it was alive. You may be surprised to know, then, that these dinosaurs were relatively small compared to some of the other dinosaurs on our list!

A Note On The Largest Dinosaur Ever Lists

There is constant debate, a constant to and fro argument about what was the largest dinosaur to ever walk the Earth. Currently, it is likely to be Argentinosaurus, and although in a few cases puertasaurus has been considered to be bigger the evidence isn’t really there.

We have also mentioned two dinosaurs at the end where there is and then isn’t evidence that they could have been even large than all of the dinosaurs on the list. These two dinosaurs Amphicoelias fragillimus and Bruhathkayosaurus. are known from a vertebra, and known from a description of a vertebrae and that’s all. They are worthy of a mention as one may well turn out to be confirmed where the other one, cool and large as it may have been, may also have just been a recording error! More on both at the end of the article.

So below we have 5 of the largest Dinosaurs to ever walk the Earth, we have missed some out, supersaurus doesn’t get a mention, neither does saltasaurus for the sake of keeping the article manageable.

To cover all the huge long neck, sauropod dinosaurs, that have a claim to the title of largest dinosaur ever is a book not a webpage. 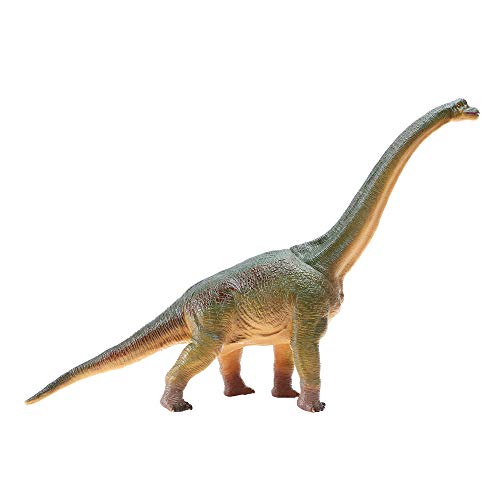 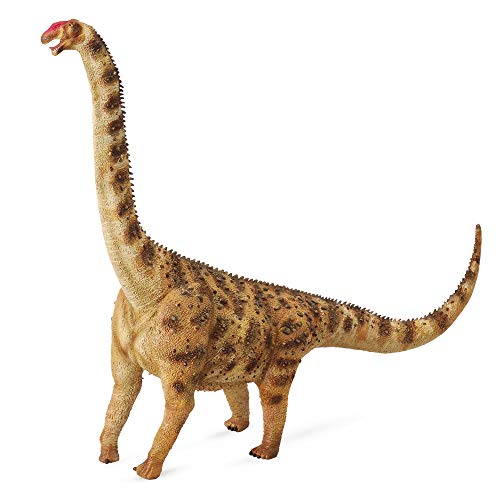 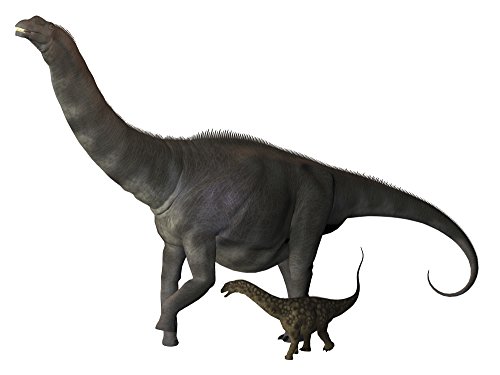 Holding first place for the largest known dinosaur ever, at the moment, is the Argentinosaurus It is the largest herbivore known to date. This colossal dinosaur was only slightly larger than its sauropod brothers and was around 100 feet long.

The Argentinosaurus typically weighed between 55 and 100 tons, making the largest of this group.

Like the Puertasaurus, this dinosaur was a member of the most dominant group of Cretaceous-era sauropods, also known as Titanosauria. Its incredible size limited its speed, though, as they could only move at a maximum of around 5 miles per hour.

Due to incomplete fossils and remains, the Argentinosaurus’ size has only ever been estimated and can’t be confirmed. The largest Argentinosaurus bone ever found was a femur bone and measured 8.2 feet tall!

Compared to its mammoth adults, Argentinosaurus eggs were tiny and were only around a foot in diameter. The egg’s minute size would mean that it would have taken juveniles up to fifteen to 20 plus years to reach their final size.

If the Top estimates of Puertasaurus size are accurate then it would be the largest known herbivore to date. However it has been scaled down in size in recent years. The initial remains of this dinosaur consist only of four vertebrae. Researchers  found two caudal vertebrae, one cervical and one dorsal vertebra.

Because these were the only bones found that belonged to the Puertasaurus, knowing the exact features of this dinosaur is difficult. However, scientists have estimated that these giant sauropods were around 115 feet long.

Researchers estimated both the length and weight of the Puertasaurus based on the size of the largest of the four vertebrae found, which was the dorsal vertebra. The dorsal bone alone was 3.5 feet tall and around 5 feet wide, meaning that the Puertasaurus would have also weighed a scale-tipping 88 to 110 tons….maybe.

More recent estimates put it at 50-60 tons and 98 feet long. Still as long as a Blue whale but more on a par with Patagotitan in weight. This is why we dropped it to number 2.

The Patagotitan was another massive sauropod that grew as long as 120 feet. But, because there is no complete skeleton, researchers haven’t been able to confirm this estimated length.

Although these dinosaurs were very long, they weighed less compared to the other sauropods we’ve already mentioned and only averaged a weight of 57 tons.

The first known Patagotitan bone discovered was a humerus measuring 5.5 feet long, which gives credibility to this dinosaur’s estimated size.

Additionally, the exterior edge of the upper arm bone showed a pronounced bulge. In contrast, the outer border of the lower thigh bone was straight.

The Dreadnoughtus is another gigantic herbivorous dinosaur that once roamed the earth. With a near-complete skeleton, this dinosaur’s size and length are among the most accurate measurements for giant dinosaurs.

These dinosaurs were massive, with a body that measured around 85 feet long. The Dreadnoughtus had a neck that was approximately 37 feet, a head of about 3 feet, and a tail of an estimated 29 feet long. That means that this dinosaur’s body was much smaller than the rest of it, measuring in at a relatively small 17 feet long.

It may be interesting to note that the scapula and ilium of the Dreadnoughtus are longer than those of any Titanosaur, and measure 5.7 feet and 4.2 feet, respectively.

After discovering this dinosaur, it was given its name to illustrate that it was so massive that it couldn’t have been afraid of anything. The term Dreadnoughtus originates from twentieth-century battleships that were also large in size and extremely powerful.

The Brachiosaurus is one of the more unusual-looking herbivores on this list. With front legs that were longer than its hind limbs, this dinosaur’s body shape resembled the slanted frame of a giraffe.

These dinosaurs also had a relatively small head for their large 75-foot tall frame and had a much taller neck than some other herbivores. Weighing in at 64 tons, the Brachiosaurus still had a sizable body.

While its high nostrils led to the assumption that it could live in water, it was eventually confirmed to be a terrestrial dinosaur.

it is thought that Brachiosaurus was a herding dinosaur that ate and traveled among other herbivores. Paleontologists believe they lived in herds along with other small herbivorous dinosaurs. This herding suggests that they were relatively peaceful and friendly in nature.

While there is still some debate over the actual size of some of the largest herbivores, some of their size estimations may be interesting to compare to the Dreadnoughtus Schrani. The Dreadnoughtus is one of the only dinosaurs on this list with a nearly-complete, relatively intact skeleton.

With more accurate size estimations than the other dinosaurs, you may be able to draw your own conclusions as to just how large some other herbivores might have been to be even bigger than the Dreadnoughtus!

* Note: Speculation is nowhere more common that in the lengths and weights of the Sauropod dinosaurs. The two stared dinosaurs are either “missing” or still being researched and even the weights and sizes of the others vary HUGELY. Argentinosaurus is considered the largest dinosaur so far, and dreadnoughtus has the most discovered complete skeleton found.

Amphicoelias Fragillimus is an anomaly, in that it basically doesn’t exist. The fossils of this, would be largest dinosaur ever to live on Earth, never turned up or disappeared about 150 years ago.

is an unknown long neck dinosaur ( sauropod) It is only half known from a drawing and a note from a fossil dig over 100 years ago. That fossil has never shown up though. It was originally a dorsal vertebrae that measured 2.7 m (8.9 ft)

If scaled up to its full size would be a Dinosaur that would have measured 130-200 ft long, (40 to 60 metres) The top end of that scale, and for that matter the bottom estimate, would have made it the largest ever dinosaur, and larger than a blue whale!

Even its weight would have started to approach the weight of an average blue whale, an animal that is supported by water, at 300,000 lbs, or about 140,000 kg.

That fossil ever did show up and in 2018 the Amphicoelias was reclassified as Maraapunisaurus, if fossils are found to prove this was accurately measured it would be by far the largest dinosaur ever, even bigger than another vanishing dinosaur the Bruhathkayosaurus.

Even thought their size would make them famous, with the disappearance of fossils and proof it should be perhaps their vanishing abilities they are famous for!

A barosaurus fossil has been examined and the scientists have classified it as 99% certain it is from a barosaurus, to be super massive. the fossil is another vertebrae (called BYU 9024) which was 4.5 feet long, and would suggest a dinosaur 150 feet plus!.

This fossil has not disappeared, and is being studied at the moment. Although the dinosaur was not perhaps as heavy as some in the list above it would, if confirmed make it the longest ever land dinosaur, and due to this massive length one of the heaviest dinosaurs of all time as well.

We also have an article on the friendliest dinosaurs if you want to check that out as well.

So there you have it, there are so many different ways to count the largest dinosaur ever. Can we prove it, what fossils are there, do we have proof. The simplest way of looking at it, and the way we do, is that there were about 8 super massive sauropods alive during the 190 or so million years that the dinosaurs were on earth.

All of them huge, and unless weighing them is something we can recreate there is always going to be argument about how long and how heavy they were compared to each other. It is likely that Argentinosaurus was the largest, and the barosaurus vertebrae will prove that there were super massive dinosaurs even within species, and it may take the title at some point.

the thing is it really doesn’t matter if one was the equivalent to 30 elephants or 31 elephants, or if it was 110 tones or 108. They were the biggest dinosaurs ever to walk the earth and, for us at least, that’s enough.