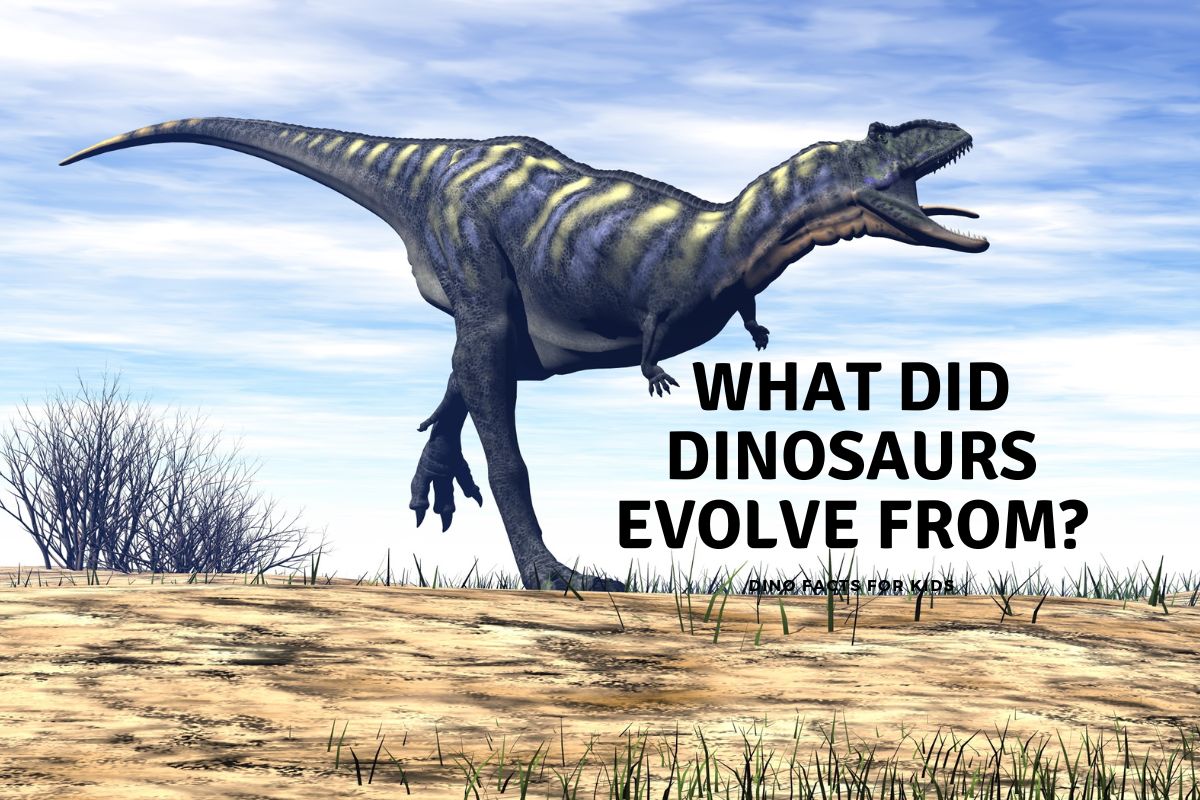 With all the attention given, perhaps rightfully so, to dinosaurs and their 170 or so million years as the dominant species on the plant, less attention is given to how they came to evolve and what they evolved from. We take a look at what came before the dinosaurs and the ancient reptiles they evolved from, and what gave them their chance to evolve into the over 1000 species of dinosaur we currently know about now.

Dinosaurs evolved from ancient reptiles called archosaurs over a period of 40 plus million years. They came to be the dominant group around 200 million years ago in part due to the Triassic – Jurassic Extinction event at the time. Archosaurs are also the ancestors or pterosaurs, crocodilians and modern birds.

What did Dinosaurs Evolve From?

Dinosaurs are archosaurs, and evolved from these primitive reptiles over the course of about 40 million years. Initially evolving firstly into dinosauromorpha, reptiles that shared more with dinosaurs than archosaurs, and finally into the 1000 or so species of dinosaur we have discovered today.

Although the increase in species of dinosaurs occurred after the Triassic – Jurassic Extinction event there is increasing evidence that archosaurs and dinosaurs did share their environment for million of years prior to this, although dinosaurs were not dominant at that time.

Dinosauromorpha, reptiles that shared more in common with later dinosaurs than their archosaur contemporaries and ancestors, are thought to have have lived up to 250 million years ago and gradually evolved to be more dinosaur like.

Dinosaurs with the discovery and classification of examples like Nyasasaurus Parringtoni that lived 245 million years ago, are thought to have lived alongside, or at least in the same time frame as dinosauromorpha, and archosaurs that were alive as well.

Following the Triassic Jurassic Extinction event, which we discuss below, dinosaurs, early crocodiles and pterosaurs, were able to fill the niches left by the extinction of the larger and more prevalent (at the time) archosaurs Paving the way for them becoming the dominant species on the planet 200 or so million years ago and evolve over the next 135 million years into all the species we have discovered today.

Early Dinosaurs are known as Dinosauromorpha, these were reptiles that while not classified as dinosaurs shared traits with them, and had a clear relationship with later dinosaur species. They date from up to 250 million years ago and were not quickly replaced with dinosaurs, with only the extinction event really providing dinosaurs, as we know them now, the chance to evolve into the 1000 species we currently know about now. Although they, or more accurately archosaurs, were in a decline prior to this.

Examples Of dinosauromorpha and early dinosaurs include

Differences between a Dinosaurmorph and a Dinosaur

As is to be expected there are differences between the two, and we list examples of these below. Dinosauromorpha can be thought of as base version of the later dinosaurs, a kind of dinosaur missing link ( though not missing) that bridges the gaps between archosaurs ( as we know them) and Dinosaurs and differences, and similarities can include the following.

What was the First Dinosaur

Although there is debate around the first reptile that can be the classified as the first known dinosaur the common consensus is that the Nyasasaurus parringtoni is the first actual evolved dinosaur . (currently)

Nyasasaurus parringtoni, or the Lake Nyasa Lizard, lived around 245 million years ago, and although discovered in the 1930s was not fully researched and described until 2013. it was thought to be between 2 and 3 metres in length ( 6 to 10 feet) and studies of its partial remains, in particular the humerus bone suggested in was much more closely related to dinosaurs than to Archosaurs.

For a dinosaur of this age it shows not only had dinosaurs evolved much earlier, but they actually shared environments with their ancestors, not just dinosauromorpha but also with archosaurs as well.

Why did Dinosaur Ancestors go Extinct

Archosaurs, who are the ancestors of dinosaurs, and represented today by birds and crocodiles, were alive for approximately 50 million years on Earth. The name Archosaur means Ruling Lizard, and at the time they certainly were. The earliest known Archosaurs date from around 247 to 251 million years ago, and were crocodilian, with fossils of bird ancestors a little younger and dating from 242 -247 million years ago.

There Dominant presence in the fossil record stopped in line with the Triassic – Jurassic extinction even around 200 million years ago although they didn’t by definition go extinct. As dinosaur’s were alive then, as were crocodiles and pterosaurs ( all of which are classified as Archosaur) survived. however most other, especially larger archosaurs did not recover from this event and their extinction paved the way for dinosaurs to take over as the top species on the planet. Where they would survive and evolve until the next large extinction event 130 million years later.

These Archosaurs, especially the Pseudosuchian ( false crocodiles) were very suited and had evolved to their environments, and when climate change, volcanic winters and hotter environments they were ill suited and not adaptable enough to survive the changes.

this allowed the dinosaurs to evolve and flourish in areas that were previously occupied by these larger more successful but less adaptable reptiles had ruled. We look at why the dinosaurs survived this extinction in a section below.

What was the Triassic – Jurassic Extinction Event?

With the Extinction event being 200 million years ago it is not certain on the cause ( although the effects are more well known) and there are a few theories we list below.

Effects of the Triassic – Jurassic Extinction

Whatever the cause is found out to be the effects are easier to understand. it is thought that about 75% of sea and land based life went extinction at and around that time. While that sounds terrible it ranks only fourth in the list of extinctions with the Permian – triassic extinction topping the chart at 96% of ocean life and 70% of land animals. 252 million years ago.

Plant life: The extinction did not just include archosaurs, reptiles and marine life. Plants were also impacted with about 60% of flora and plant life becoming extinct at this time.

Marine Life: although some marine life escaped the effects of the Triassic – jurassic extinction like plankton and early snails and slugs, coral was badly affected and therefore the life these reefs supported. ammonites were also badly affected and many went extinct as this time. Fish however were much less impacted, and only some marine reptiles ( which were in decline prior to this) like shastasaurus and shonisaurus species are thought to have gone extinct as a result of the extinction event.

Land Life: Although plenty of land animals did go extinct at this time ( or around this time) they were replaced by crocodilians, lizards and of course,as we know, dinosaurs. Animals particularly affected by the extinction were tetrapods, over 40% are thought to have gone extinct at this time, as well as the large amphibians.

So with archosaurs in many forms facing extinction it allowed their smaller more adaptable descendants ( dinosaurs, and dinosaurmorphs) to live thrive and survive for the next 135 million years, alongside pterosaurs in the air and early, smaller, crocodiles in the water.

Why Did Dinosaurs Survive The Triassic – Jurassic Extinction.

As we mentioned for 30 or so million years dinosaurs were not the dominant life form on the planet, but the (probably) eruptions and shifting of Pangea 200 million years ago causing (again probably) the Triassic – Jurassic Extinction gave them their chance to evolve further. One that they clearly embraced with both clawed hands.

The dinosaurs were different enough to have had some advantages over their reptilian archosaurs who lived at the same time which we will take a look at below.

Feathers: Feathers are not particularly new with regard to dinosaurs, although our knowledge of how widespread they were seems to be expanding year on year. early dinosaurs were small, and some had evolved feathers. Now in the intense climate change that occured 200 million years ago a warm insulating covering with feathers was a distinct evolutionary advantage of larger reptiles and in the volcanic winters certainly would have helped in their survival:

Size: Most dinosaurs were both less widespread and less large than other reptiles at the time, and this means they required less food ( even with their higher metabolism. As large reptiles went extinct smaller dinosaurs in smaller numbers could take over the food supply previously unavailable to them. It was later once this competition for resources was gone they evolved into the huge sizes we now know them to be.

Adaptability: Dinosaurs at the time were evolving away from the archosaur and were significantly different than other reptiles of the time. They had been subjected to higher, cooler latitudes ( mostly ) prior to this extinction event and the reasons but forward for this are they couldn’t complete with the larger reptiles closer to the equator.

Heat and wildfires would destroy food sources and with a lower metabolism these reptiles ( pseudosuchians or false crocodiles) needed less food. pseudosuchians were the branch of archosaurs much more closely related to crocodiles than dinosaurs.

However, when the climate changed dinosaurs with their evolutionary advantages , due to feathers, bird like lungs and light bones, to manage cooler temperatures would have coped and managed much better than their larger ( at that time) pseudosuchian ( false crocodile) cousins.

We have a few articles on the site that cover dinosaurs and their possible relations, you can try a search or pick from the list below 🙂

Dinosaurs evolved from a branch of the archosaur family, although there were many types of archosaur at the time. It is likely that they were alive at the same time with archosaurs evolving into dinosauromorpha, and then into true dinosaurs over a period of 30-40 million years.

As we mentioned the first true dinosaur is thought to be Nyasasaurus parringtoni which predates the previously thought true dinosaurs by 10 million or so years. So it becomes clearer that the dinosaurs took millions of years to evolve, and it was an ongoing event, given a boost by the evinction events that they were more apatable to than their archosaur ancestors.