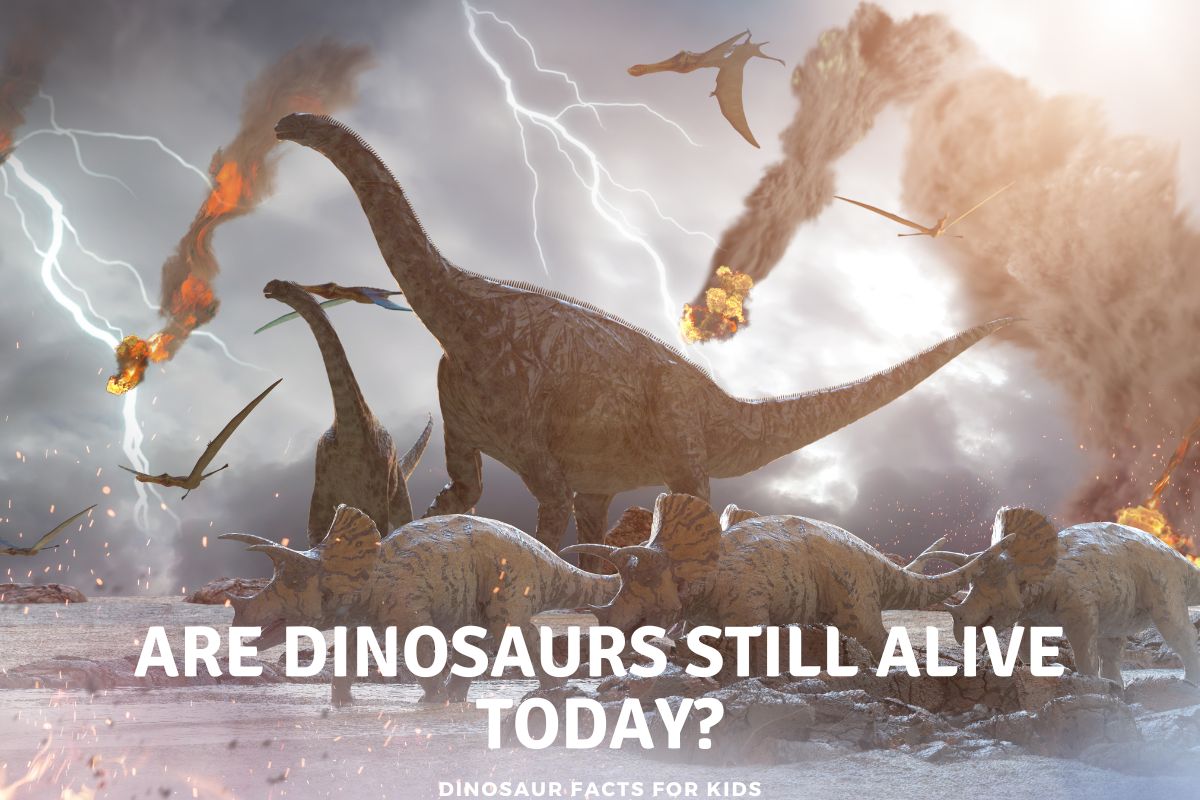 Those of us who have grown up with film franchises like Jurassic Park have often dreamed of what it would really be like if dinosaurs were still alive and kicking today. It’s not as if we’d want them wandering the streets or taking a dip in our pool or anything, but it’d be nice to think that somewhere out there life had found a way. In the minds of some, however, it already has.

Dinosaurs, as classified by science, went extinct 66 million years ago in the K-Pg, the Cretaceous-Paleogene extinction event. Those that survived adapted and evolved to the present day and are now classified as birds.

There are plenty of people who assert that dinosaurs are indeed alive, and walking the Earth around us, and no, this isn’t one of those jokes about Congress. But are they right? Are dinosaurs still alive? This is the core question that we intend to explore in this article.

In short, the bad news is that dinosaurs are not alive today, no matter how much people insist that there are certain creatures that are indeed dinosaurs.

The good news, however, is that the descendants of dinosaurs are alive, and all around us across the world. Who are they? What was their common ancestor? Read on to learn more about these important questions.

Also known more simply as the K-Pg, the Cretaceous-Paleogene extinction event was the infamous “asteroid that wiped out the dinosaurs” event that you’ve heard so much about in the past. It happened roughly 66 million years ago and destroyed about 75 percent of all plant and animal species on Earth.

As with all mass extinction events, there were a significant number of survivors, including many crocodilian species, which are considered by some as “dinosaur survivors.”

The other key survivor of the event was avians, more commonly known nowadays as birds. While there are meaningful claims that birds are ‘living dinosaurs,’ there remains a lot of sharp and heated debate on the subject.

What do the crocodilians — crocodiles, alligators, caymans, etc. — have in common with birds? They are all part of the wider Archosaur family. Archosauria, which roughly translates to “ruling reptiles,” refers to a huge clade of diapsids, but now with only two surviving branches, namely crocodilians and birds.

These creatures exhibited hardy and advantageous characteristics after the K-Pg extinction that helped them and their descendents survive and thrive through the subsequent eons.

For example, both crocodilians and birds excrete uric acid, unlike mammals that excrete urine. The acid form can be excreted as a paste, which helped these animals to retain water far more efficiently than any surviving mammals.

Both crocodilians and birds are descended through a long line of common ancestry going all the way back to the early triassic period. The larger family line is known as Saurpsida, with earlier now-extinct branches including Proterosuchidae, Erythrosuchidae, Proterochampsidae and more.

What’s really interesting about the whole discussion is that among the two, it’s the one that looks least like the way people imagine dinosaurs that actually shares the closest genetic connection with the dinosaurs we feature in our favorite movies, like the T-rex and velociraptor, and that’s birds.

Crocodiles have the teeth, the scales, the tails, and the fearsome dinosauric demeanor that we might associate with these monsters, but it’s birds that are closer in more ways.

In particular, the birds share many similarities with their predecessor the theropod dinosaurs, which included the mighty T-rex. Indeed, evidence shows that ancestors of chickens, ducks and many other familiar birds were around at the time of the P-Kg event, and survived to help the line continue its development and evolution to the familiar world of birds that we know and understand today.

Not an Instant Extinction

Hollywood has once again distorted many people’s understanding of the K-Pg extinction and how it really unfolded. Far from being an instant death sentence to all the creatures involved, it actually happened over a much greater period.

It is believed that an asteroid collision triggered the event not just because of the huge crater in the Mexican gulf, but also (and more importantly) because of the K-Pg boundary.

This is a thin layer of sediment in the geologic record that can be found all over the world. The reason it led geologists to believe an asteroid collision had occurred is the high content of metal iridium that was found in the sediment layer, a substance far more common in asteroids that can be found naturally in the Earth’s crust.

While the immediate effect of a 15-km-wide asteroid hitting the earth is certainly devastating, it wasn’t any blast or explosion that killed most life on earth in the aftermath.

Rather, it was the devastating effect of minerals like gypsum being launched into the atmosphere where it vaporized and spread like an aerosol, poisoning the air and making the environment increasingly toxic for the majority of species,

Including many essential species like plankton that couldn’t survive in the increasingly acidic ocean environment.

The subsequent years brought ecological collapse, to the detriment of many other species. While many scientists were not surprised at the survival of many avian species given their ability to burrow, hide, and even live in endurable environments such as termite nests.

They are more surprised at the survival of the crocodilians while many other larger reptile species were destroyed. In the end, it’s just the Jurassic Park movies say — life finds a way.

What about all the people who have claimed to see dinosaurs in the modern age? Among the famous cryptid myths is that of the Loch Ness monster, a prehistoric plesiosaur species apparently surviving in the murky depths of a Scottish lake for countless eons…or is it?

The fact is that no so-called “sightings” of Nessie have ever been properly verified, and numerous surveys of the loch have turned up nothing.

The more likely story in these cases is that the desire of people to bring back the dinosaur simply outweighs their perception of reality.

We can remain on the lookout, but for the purposes of any modern conversation, the dinosaurs are long gone. If one should wish to protect their true legacy, then they should consider taking action to protect the many threatened species of bird that populate areas all over the world right now.

Turtles, Crocodiles and lizards have, for the most part remained similar for million of years, however despite being alive at the same time, they are not dinosaurs, and evolved along a different path to dinosaurs.