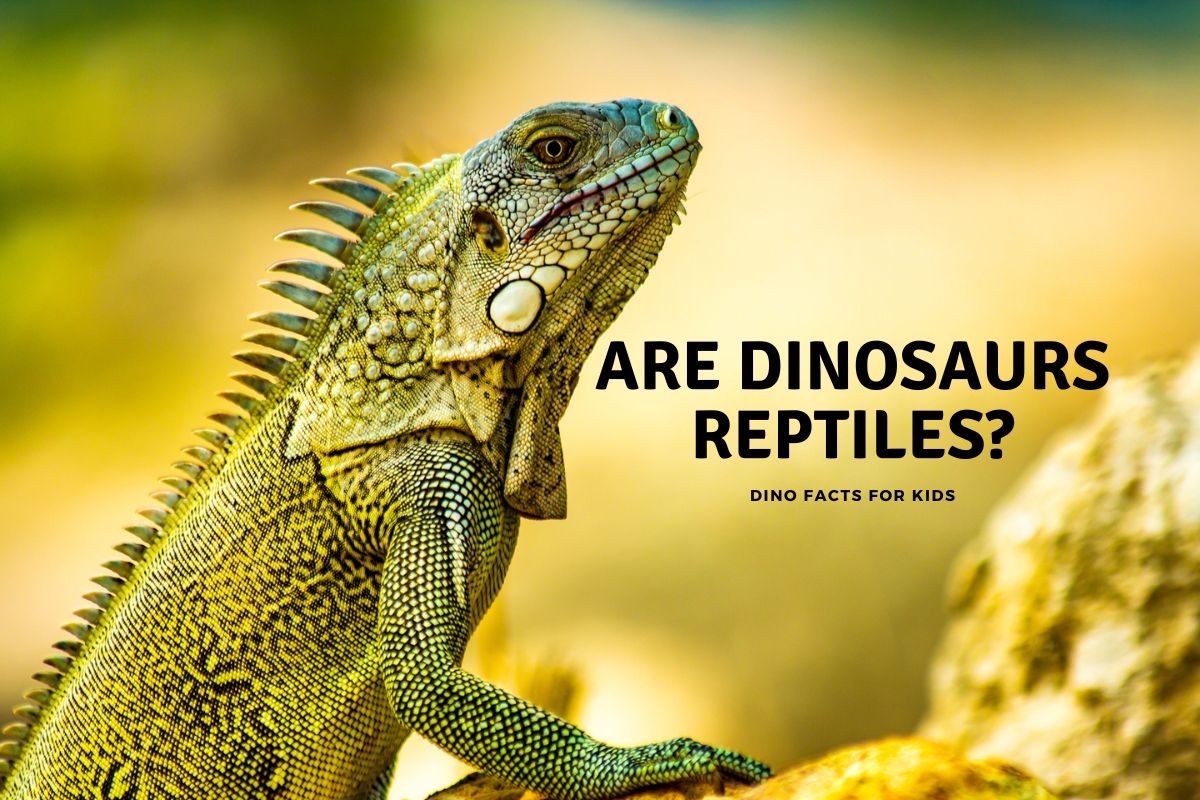 Although there are many animals that look like dinosaurs in the modern world, like Ostriches, Rhinoceros, even giraffe, the group of animals that most resembles dinosaurs are reptiles. At least in appearance. Many reptiles such as crocodiles or lizards are scaly, have no hair, have armor and long powerful tails, but do dinosaurs belong to this group, are dinosaurs reptiles?

Dinosaurs are reptiles under the subspecies Archosaurs. This is because dinosaurs display traits that make them reptiles, such as scales, building nests and laying eggs. However, dinosaurs do not have pelvic and leg structures similar to common reptiles.

This article explores if dinosaurs are reptiles by looking into what makes an animal a reptile and how dinosaurs fit in. We also look at if dinosaurs are warm or cold-blooded, as well as explore if animals like the Pterosaurs and the marine animals that lived at the same time can be considered as reptiles as well.

Dinosaurs are considered reptiles, in specific a type of archosaurs. This is because if studied using Phylogenetics, dinosaurs were essentially reptiles that evolved over millions of years. Dinosaurs also are related to many other reptiles and modern birds.

The question of whether dinosaurs are reptiles may depend on what process you take. The most common way of analyzing this question is through the study of Phylogenetics.

In Phylogenetics, you group animals by looking at their ancestors. You group them together despite minor differences if they share the same ancestors. You may apply this approach to study groups of animals such as apes, cats, and dinosaurs.

To analyze if dinosaurs are reptiles, the best way is to start by identifying the earliest reptilians and track their evolution.

The earliest reptiles you may find may have branched out from amphibians about 350 million years ago. These amphibians slowly learned to become less needy of water. They developed the ability to move on land more and more.

They also developed the ability to lay eggs with shells, and their new scales protect their skins from the sun. These earliest reptiles eventually thrived and ruled the earth during the Mesozoic era.

The first mammals also came about during this era, but their growth wasn’t as successful as reptilians. Mammals only become the dominant (arguably) animals on earth much later.

These first groups of reptiles eventually split into several groups. Some returned to the water and developed large shells, such as turtles. Some evolved into great swimmers, such as ichthyosaurus and plesiosaurus. Some remained capable of staying on land and water, becoming Squamatas such as snakes and lizards.

One group of these early reptiles eventually evolved into Archosaurs. These Archosaurs later split into land dinosaurs . Some developed wings and became flying reptiles (Pterosaurs) and crocodiles all from a common reptilian ancestor and all the same but different.

Suppose we track the evolution of reptiles using Phylogenetics. In that case, we may conclude that dinosaurs are reptiles because they evolved from ancient reptiles and retain many of the traits of reptiles ( although as we discuss below not all)

So dinosaurs are classed as reptiles, along with turtles, crocodilians and thousands of other species, due to some common ancestors. We will take a look at those common ancestors in the next section and in the article linked below.

What reptile did dinosaurs evolve from .

The first recognisable dinosaurs are aged from about 230 to 245 (or so) million years ago. They have been discovered during the last 100 years or so in fossils beds of Brazil and Argentina.

The oldest currently thought dinosaur is the Nyasasaurus Parringtoni which dates from fossils of 243 million years old. It was small at about 2 metres long, walking on 2 and sometimes 4 legs. At the time dinosaurs were rare and there are much greater fossils of archosaurs (their ancestors.) in fact until about 201 million years ago and the triassic Extinction event, dinosaurs would not have been the dominant species on the parent.

The key aspect of finding Nyasasaurus Parringtoni is that is is already recognisable as a dinosaur, which means that for quite a few million years before its date there would have been dinosaurs constantly evolving.

As we mentioned above, and below, Dinosaurs are still classified as reptiles and evolved from ancient versions of them. it is currently thought that these dinosaur ancestors would have been. These, the animals that dinosaurs evolved from, although known by a few names, were called ‘dinosauromorphs’

Dinosauromorpha are thought to have lived around 242 to 244 million years ago in the middle triassic period. Although if fossilised footprints in poland are from ‘dinosaur morphs then this may even date to 249 million years ago.

One of the oldest known members of this group is currently the Asilisaurus, ( name meaning ancestor lizard) that may have lived 245 million years ago and was bipedal with its legs under the body ( A key factor in what makes a dinosaur a dinosaur) and was between 1 to 3 metres long and about 10 to 30 kg ( 20 to 70 lbs)

So although it took awhile for dinosaurs to evolve from these dinosauromorpha, and they were helped in the rise by the extinction events of 200 million years ago, once they did they exploded in a variety of size and shape in the next 140 million years to become the more recognisable giants we know today.

What Makes An Animal A Reptile?

A reptilian would usually have a spine, be cold-blooded, lay eggs, and have scales. Some reptilians also had the ability to fly. Reptilians are grouped into turtles, crocodilians, squamates, and tuataras. The first reptilians existed over 300 million years ago and it is from these than dinosaurs evolved.

Traditionally, reptiles are cold-blooded animals, meaning they cannot regulate their body temperature. They are also vertebrae, meaning they have a backbone or spine. Reptiles also usually have scales instead of feathers or coats of fur or hair.

In general, reptilians also lay eggs, although some may give birth to babies. Reptiles also usually have at least one lung and four legs. Reptilians could have existed as early as 300 million years ago.

Which Reptiles give Birth to Live Young?

To explain how this happens we need to get little more scientific. They way these reptiles do give birth, are split into to methods. These are viviparous and ovoviviparous.

Reptiles are a big grouping and may include many animals. Common examples include crocodiles, snakes, turtles, and lizards. However, genetic evidence also concluded that modern birds are probably descendants of avian (bird like) dinosaurs,

How Are Reptiles Different From Dinosaurs?

Dinosaurs can differ from reptiles in many ways, as they evolved from one. Dinosaurs may have a different hip structure than common reptilians, with legs under their body rather than at the side. Some ancient reptiles also could fly, which is different from modern reptilians. Many dinosaurs are also warm-blooded, unlike common reptiles.

As they evolved, they may remain characteristics of a reptilian but may have developed some differences that made dinosaurs so while part of the family they could be quite different, just like any other animal grouping, if we think that a cat, a person and a whale are are classed as mammals but quite different looking with many differences as well!

For example, common reptilians have their legs extended to the side of the body. Think of the legs of crocodiles or lizards. Dinosaurs, however, do not. Instead, they have a bird-like hip, which means the legs extend from under their body. This enables them to walk upright and move much faster on land.

In fact, if you analyze a modern bird’s legs, you may notice it extends from underneath its body, and each leg has three toes and claws. That is very similar to a land-based dinosaur such as T-Rex.

Another thing that makes dinosaurs different from reptiles is that they can be warm-blooded compared to commonly cold-blooded reptiles. In fact only one modern reptile is known to be able to regulate its body temperature to some degree ( endothermic) and that is the Argentine Black and white tegu.

It was a common assumption among Paleontologists that dinosaurs were cold-blooded. However this has changed and more and more species of dinosaurs (in fact most) are thought to be if not completely warm-blooded ( like modern mammals and birds) then at least something in-between Further still, fossil finds may propose that some dinosaurs may have been able to regulate their body heat, such as using the plates on their bodies or feathers and sails.

Are Flying Dinosaurs Birds, Or Reptiles?

Flying dinosaurs are reptiles. If studied using Phylogenetics, flying dinosaurs may have originated from the first reptiles as early as 300 million ago. Flying dinosaurs were not birds and in fact even though they are commonly, and incorrectly, referred to as dinosaurs they were not. They were Pterosaurs, a flying reptile, with many different species.

Flying dinosaurs or Pterosaurs can be considered reptiles, as they evolved from the first reptilian around 300 million years ago. These reptilians eventually evolved into archosaurs and land-based dinosaurs such as T-Rex and flying reptiles such as Pterosaurs.

These Pterosaurs may not be dinosaurs, but they did share many similarities with land-based dinosaurs. They have a similar hip structure, with the legs extended from the bottom of their body, allowing them to stand straight, they may have had proto coverings on their bodies, and would have had light bones like some dinosaurs. They also would have laid eggs like dinosaurs.

This separates them from different branches of reptilians, such as crocodiles or lizards, with their legs at the side of the body.

Dinosaurs are thought to have evolved from dinosauromorpha around 250 million yearsa re so ago. While they evolved from reptiles the 40 or so million years till the late Triassic, saw them undergo significant changes.

Some grew larger as we know, but the biggest change became the ability to walk on two legs, and for those legs to be pointed down to allow this compared to their straight out horizontal legs of their reptile ancestors. Once their archosaur ancestors faced extinction the smaller, more mobile dinosaurs were able to thrive and evolve into the over 1000 species we know of today.

However despite all this, dinosaurs, sharing that reptile common ancestor all those millions of years ago, are still classified as a type of reptile.