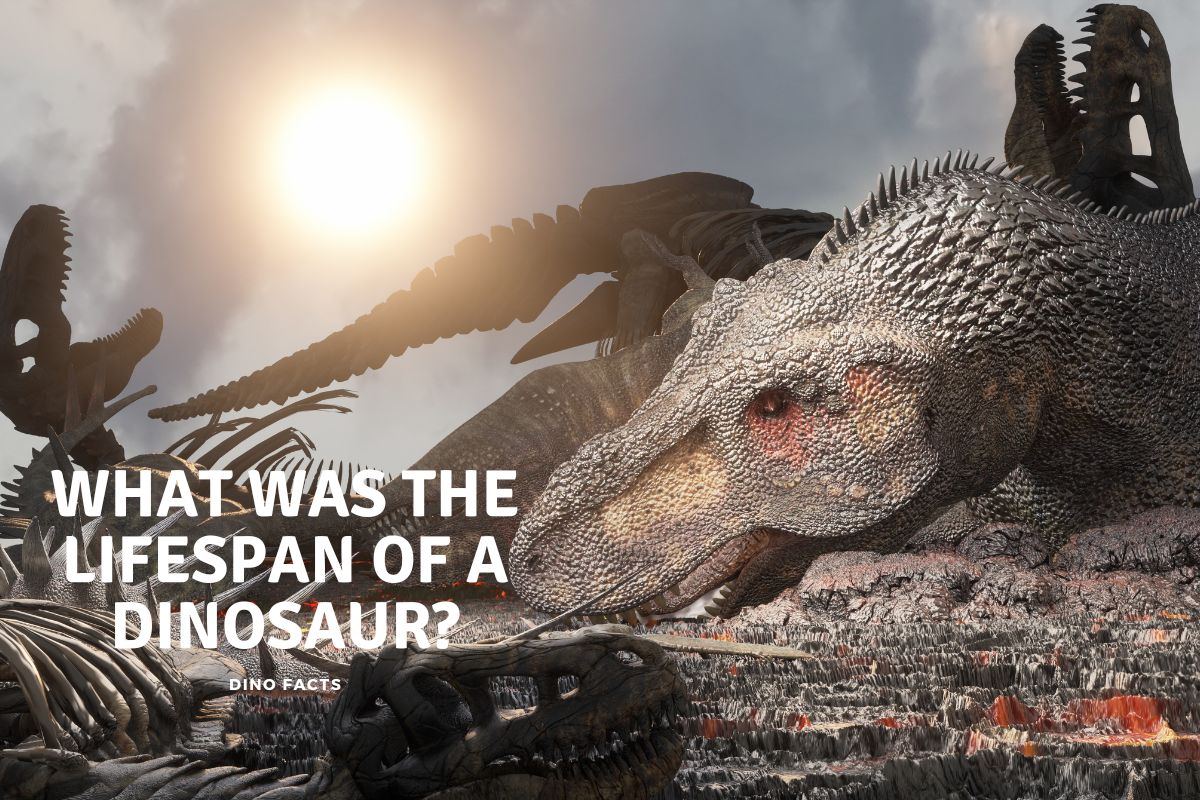 So much information has been discovered about the dinosaurs. Everything from how big they were to what they ate. The one thing that has been hard for experts to figure out is how long they lived. Paleontologists worldwide have their opinions and have discovered that some dinosaur fossils can be aged by using the rings in the bones. But most are just educated guesses. With that being said, what was the lifespan of a dinosaur?

Research suggest that the average lifespan of dinosaurs varies depending upon the species and the metabolism rates. Herbivores, which were much bigger but had slower metabolisms, could live 70 to 80 years. The carnivores were smaller, had higher metabolisms only lived between 20 and 30 years.

You need to remember that since there are no live specimens to study, the scientists use what they can find in the fossils and then compare them to some of the animals, reptiles, and birds that are alive today. Obviously, this is not just a number they come up with out of the blue, but they are still only (very) well educated guesses. Let’s look into how these specialists come up with the average lifespan of a dinosaur.

It has long been said that dinosaurs were cold-bloodied reptiles, much like snakes and lizards. The first comparison made by the paleontologists was that the dinosaurs had to be like a turtle or a crocodile, meaning they lived up to 300 years or so. Since then, things have changed due to technology and the new evidence they have discovered. Let’s look at some of these comparisons a little more in-depth.

The thing that can be learned from comparing the dinosaurs of old to the creatures of today is that it is doubtful that they lived past 100 years old. Even then, because of the harsh environment that they lived in, they likely lived much shorter lives than what was once believed.

Experts are divided into the subjects of the dinosaur’s lifespan, but to be realistic, 100 years of life is a high number that is quickly becoming the standard length of life for the monstrous creatures.

It has been shown that the higher the metabolism is in a creature, the less likely it is to reach the ripe old age of 100. On the other hand, the dinosaurs with a slower metabolism lived much longer because their body was not working as hard to stay alive.

What all this information boils down to is this. The larger the dinosaur was, the longer it would live. The smaller ones, such as the chicken-sized dinosaurs, would live 5 to 10 years. The larger carnivores, such as the T-Rex, could live up to 30 years as long as no accidents occurred throughout their lives. This shows that the 100-year mark suggested earlier is a high life expectancy for a dinosaur, but it is the average.

Scientists have discovered from fossils that there is another way that dinosaurs can be aged: the inside of the bones. They found rings formed inside of them, much like the rings used to estimate a tree’s age.

The problem with this is that only certain fossils can be aged in this way because some dinosaurs did not grow at the same rates all the time. Some of them would have sporadic growth spurts, like a mammal, while others would not grow at all for a small amount of time.

The ones that grew at an average rate can easily be studied to find how old they were, and paleontologists can figure out the average age of the specific dinosaurs. It all goes back to the idea that some dinosaurs were like reptiles, while some were more like birds. When more technology comes out, it will be a better way to judge the age of a dinosaur, but for now, it only works for some prehistoric creatures.

It all comes down to scientific evidence that varies from lab to lab. The experts are starting to come together and agree that the average life span of a dinosaur cannot be more than 100 years because of their metabolism and way of life. The bigger they were, the longer they lived.

When the dinosaurs are compared to animals today, it makes sense that most dinosaurs had a much lower lifespan than initially thought. As technology improves, more substantial evidence will be brought to prove what many paleontologists are saying now. Still, until then, it is best to stick with the idea that smaller dinosaurs lived much shorter lives than their much larger counterparts.